To check assessment click on the link provided: https://bit.ly/BAIA-JC

The Core Values Index (CVITM) characterizes and quantifies what Abraham Maslow called the unchanging, innate nature of a person that inscribes where a person can make their highest and most productive contribution to the world. 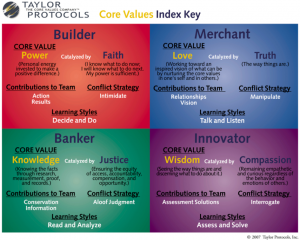 The CVI is the only human assessment that uses strategic and tactical values in a forced choice format, to gain unequivocal insight into the innate nature of the person. Since the CVI is comprised of only positive values, no such negative disclosure is required, and no context is provided.  The CVI provides a 97% repeat-score reliability, year over year. Other assessments typically provide reliability between 60% and 80%. This is several orders of magnitude improvement – which shows that not only are we capturing the innate, unchanging nature of people, but also that the instrument is accurate and valid.

Behavioral and psychological tools are by their nature fraught with problems of misrepresentation by the users, who tend to create false positives when completing the respective instruments. This is made possible by the construct of the instruments themselves and the use of context loaded questions. It is also encouraged by the common requirement to disclose negative, or perceived to be negative information about one’s self. Since the CVI™ is comprised of only positive values, no such negative disclosure is required, and no context is provided.

Core motivational drivers cause a person to want to make a contribution in a certain way. This deepest, internal-self also prescribes the behaviors and work that serve to develop self-esteem, causing people to subconsciously desire a situation that offers them the opportunity to make the highest contribution possible.

The CVI has revealed a new level of understanding of human nature, at the deepest of levels and how the conscious and subconscious mind works.  It is the foundation of a new way to achieve what Maslow called, full self-actualization and what we call Core Values consciousness.

The CVI provides a wonderful basis for a deep conversation in a very first meeting with someone. The person sees immediately that this is serious work, and knows what to expect in either a personal or working relationship.

The difference between the CVI and other tools is that the CVI measures innate preference (suitability) rather than ability or adaptability. It helps people focus on identifying what satisfies or fulfills them about the work they do, rather than on determining whether or not they are capable of doing the work.

Recently, the CVI passed the 600,000 user benchmark and currently over 15,000 CVIs are being taken each month in all walks of life, from the corporate world to education to coaching, there are multiple uses for knowing the innate, unchanging nature of an individual and the CVI reveals this information in about 10 minutes.

Your query has been received.

Are you interested in franchising your business or expanding into new markets?

Expand your US franchise Internationally

Franchise your business in the US